Christmas related baking started in a simple enough fashion.  I played with some recipes, piped a few swirls, scattered some gold pearls, thusly: 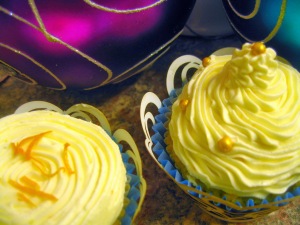 Here we have moist spiced orange sponge, studded with juicy cranberries, topped with orange & cinnamon buttercream. Demonstrating two piping styles – one finished with orange zest, the other with gold pearls.  When I came up with these beauties I thought I’d captured Christmas in a cupcake.  But I was wrong. 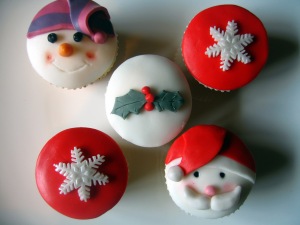 What really captured Christmas in a cupcake was the ‘mince pie’ cupcakes I came up with next.  I used a spiced vanilla sponge packed with dried fruits and orange peel.  Then, when they were still warm from the oven, I drizzled them with a fresh lemon soak. Finally, I topped them with vanilla buttercream and decorated with fondant.

With demands for more flooding in from family and friends I got on a roll (ha!) with my fondant designs, and things kinda snowballed (haha!) 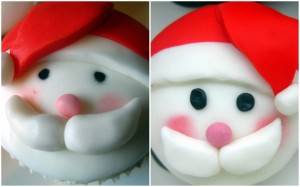 I made worried looking Santas, and some more relaxed ones. 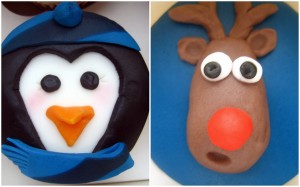 There were perky penguins and startled reindeer. 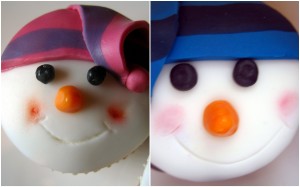 There were snowmen, resplendent in an array of stripy bobble hats. 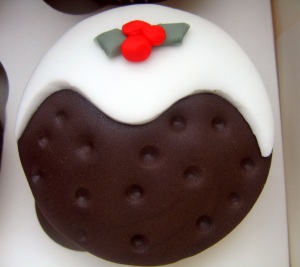 There were Christmas puddings…. 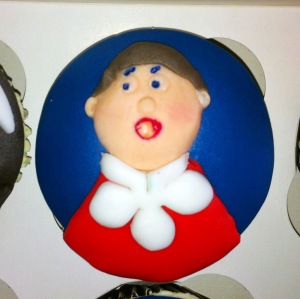 …and then there were choirboys with mouths that made them disturbingly reminiscent of blow up sex dolls.  I stopped with the cupcakes after that. 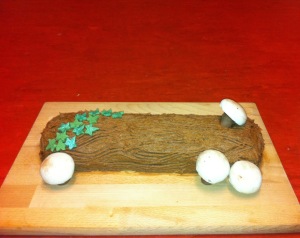 For our own festivities, I also made my first attempt at a Buche de Noel  (more commonly known as a Yule Log, but doesn’t it sound better in French?  Doesn’t pretty much everything sound better in French?!  I can’t actually speak French.  Shame on me.)  The frosting suffered as a result of the cake being taken out of the fridge too early and sitting in our overly hot kitchen – it got rather greasy in appearance but it tasted ok.

The main problem with this cake was that the frosting was too heavy for the sponge.  I had STILL not discovered the wonders of Italian meringue buttercream and the weighty old American one just wasn’t what was needed.

I ran out of time for decorating it too, so the end result looked nothing like the one in my mind.  I’ll probably have another bash at this within the next couple of Christmases…I think I could make a much better job of it 🙂 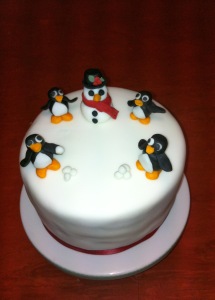 This cake was a real last minute thing.  Having been busy with my day job and distracted by cupcakes, I hadn’t given much thought to our proper Christmas cake.  It was way too late to do a fruit cake but I wanted something festive.  The solution was to create this cake, using five alternating layers of the cranberry & orange cake and the mince pie cake.  Filled and frosted with vanilla buttercream and decorated with some playful penguins, it went down a treat at the family boxing Day gathering.

What did I say before? 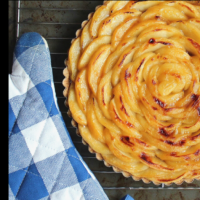 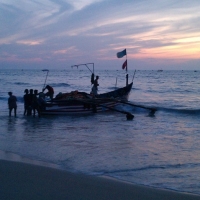 Working to defend and serve the Lancaster West community

one girl trying to paint herself out of a corner

because facts really should be sacred

an irreverent look at UK politics

A Corner of Cornwall

“Tell me, what is it you plan to do with your one wild and precious life?” Mary Oliver

The blog you'll wonder why exists!

The Sixpence at Her Feet
Frog Pond Farm

Food, Booze and Sounds from around the world

Big living from a small space

What if you spent every day looking for One Beautiful Thing?

Learn about Goan and Indian Recipes

Ingredients for a Beautiful Life!

Magazine of a Storyteller... articles about world cultures, travel, and recipes with a twist and tango ♪ ♪ ♪ ...